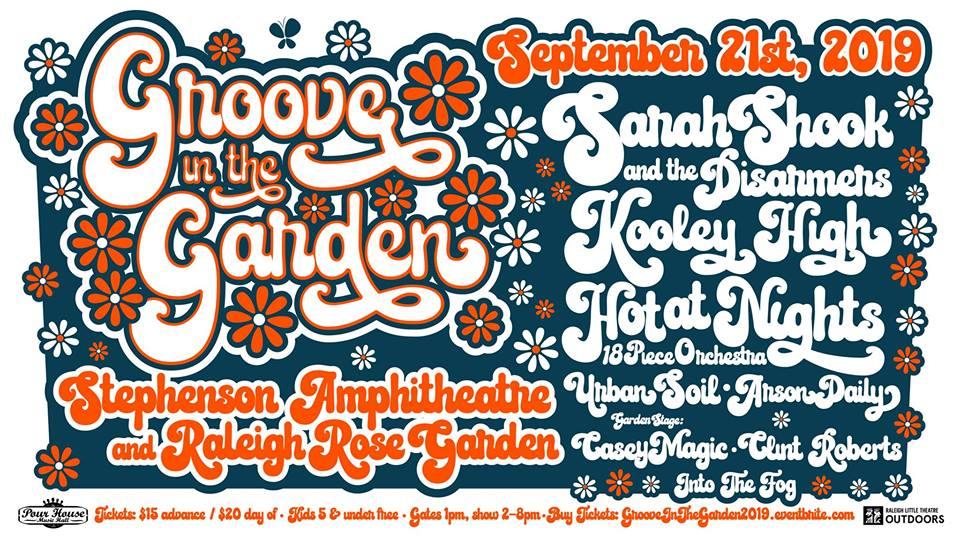 This North Carolina honky-tonk punk strikes a defiant onstage posture with a voice that goes right for the throat, a feral switchblade snarl that sometimes eases and glides but never softens...coming across as Chrissie Hynde with a drawl. — Rolling Stone

North Carolina Super-Group Kooley High arrives on the scene with the mission to delight, electrify and ignite seas of listeners thirsty for something new from the world of Hip Hop. Since they began making music in 2007, the 5 independent members have been allowed and encouraged to let their individual talents and styles flourish, ensuring the sounds coming out of the Kooley High music factory are one-of-a-kind.

The Hot at Nights were formed during the sweltering summer of 2010 in NC. Chris Boerner, Matt Douglas and Nick Baglio set out to explore the sonic possibilities of an eight string guitar based trio. The resulting sonic exploration was heavily influenced by the origins of jazz at the turn of the century, emblazoned by the raw and unbridled freedom of the 50′s and 60′s, and electrified by the external forcings of the 80′s. Since then the band has three LP’s and one EP to their credit, as well as two collaborative releases with Nicolay of The Foreign Exchange.

The Hot at Nights Orchestra is their latest endeavor. Expanding from 3-piece to a full complement 17-piece jazz big band has been no small task. The resulting wall of sound has opened up new uncharted sonic territory for the group. Realizing some of The Hot at Nights’ earlier compositions in this form, this orchestra is a feat to behold.

Starting in 2014, North Carolina natives Arson Daily combine an alt-rock indie-garage sound reminiscent to the rage of bands like Cage the Elephant and Portugal the Man . Getting their early start performing in crowded basement shows in the mountains of Boone NC, the months spent playing these shows would only help contribute to their growth as performers. It’s essential to let their energy encapsulate the listener, holding them hungry for the next show. They're on track to release their second full length album early 2020.

Raised on the DIY ethics of punk rock, Michael’s mind-boggling performances and conversational style have made him a favorite among musicians. In addition to being the personal magician to Dierks Bentley and Sheryl Crow, Michael finds that performers such as Joe Walsh, Brad Paisley, Gavin Rosdale, and Chris Stapleton all count themselves fans.

Clint Roberts is a Roots Rock artist hailing from the Blue Ridge Mountains of North Carolina. In 2017, Clint released his first solo Album entitled Hamlet Blues. Hamlet Blues speaks to themes of heart break and existential crisis, while delivering it in a rootsy package with pop sensibilities. Since it's release, Roberts has frequently toured much of the south, sharing the stage with acts such as The Wood Brothers,The Steel Wheels, and Cris Jacobs. Since his album release, his first single Broken Horns released april 5th 2019 on all streaming platforms.

Into The Fog is a string band out of Wilmington, NC that encompasses a wide array of genres from bluegrass to country to folk to rock n’ roll. The band is made up of Brian Stephenson on Vocals and Guitar, Winston Mitchell on Vocals and Dobro/Mandolin, and Derek Lane on Vocals and Bass. After forming around an opportunity to play in the 2018 Telluride Bluegrass Festival band competition, Into the Fog is quickly making a name for themselves throughout North Carolina and catching audience’s attention with their high energy blend of traditional bluegrass and modern folk. In February 2019 Into the Fog released debut album Wishin' It Would Rain.

General Parking is available on the streets surrounding the Raleigh Little Theatre campus and nearby parking lots.

Here's a map of free nearby parking lots.
https://www.hillsboroughstreet.org/directory/parking-and-transportation/free-nights-and-weekends

Additional beverage selections may be available from the food trucks.

No outside alcohol is allowed.

You are welcome to bring your own non-alcoholic drinks into the venue.

The theatre and security staff reserve the right to check coolers and personal belongings.

Dogs are allowed (yay!!) but must be kept on a leash and be well-behaved.

Bringing blankets or chairs makes seating more comfortable. Lawn chairs or the folding chairs that come in a bag work well. There is grass between the concrete benches and chairs fit well in those spaces.

************
VENDORS:
************
Are you interested in being a vendor at this year's Groove in the Garden? Follow this link to fill out the application:
https://www.raleighnightmarket.com/apply-groove-in-the-garden

*Times, dates, and prices of any activity posted to our calendars are subject to change. Please be sure to click through directly to the organization’s website to verify.

All Ages Adults & kids together