Odysseo: Truly an Amazing Show | Kids Out and About Research Triangle

Once Odysseo’s performance begins inside the big, white circus tent of Cavalia at The Shops at South Town in Sandy, you are no longer in Utah. On April 20, at the premiere event, my son Morgan and I were seemingly transported to faraway places on an odyssey--at the Mongolian steppes to Monument Valley, from the African savannah to Nordic glaciers, from the Sahara to Easter Island.

Beginning in a serene, wooded scene complete with subtle flocks of birds, horses venture onto the stage, breathtakingly beautiful, commanding your attention yet not demanding it. They seem so natural, so real, rolling around in the sand, running carefree. Man enters and they soon form a symbiotic relationship, simply and naturally—at one with one another. My son and I look at each other; there is something most amazing about this show, and we can feel it already.

Though the initial scene is serene, the show quickly gains speed, ebbing and flowing in just the right places. In fact, Cavalia, an entertainment company headquartered in Montreal, Quebec, Canada, has managed to create in one show what it would take others multiple performances.  Founder Normand Latourelle, one of the original co-founders of Cirque du Soleil, has combined a team of professional gymnasts, acrobats, aerial artists, musicians, stunt equestrian riders—all in a classy, unified performance that flows seamlessly. The horses are the majestic focus, and it would be a complete show with just them.

But the ahhh factor suddenly increases when African acrobats, with dreadlocks, drums, and muscles galore come leaping, bouncing, and flipping on scene. I counted one acrobat doing 25 flips in a row! They do so at various points, sometimes solo, other times joined with the horses and other performers. By the end of the show, there’s no question as to how they got their muscles and how they maintain them.

Add to their performances those of the stunt equestrian riders, who perform tricks at a top speed that would make any insurance company squeamish. My son and I were absolutely astounded at one trick; watch for it on horseback. You’ll be amazed. The performer only does it once because it’s so dangerous. So don’t blink! The aerial artists hold their own too. They have no fear of heights, upside down or otherwise, even hanging by their toes. You’d also never know it’s possible for humans to hold their bodies straight out horizontally from a pole for extended periods of time, making it look normal, even effortless—unless you saw it first-hand at this performance.

Amazing scene changes appear to be seamless as well, as natural as if the flora and fauna were growing right before you. In the span of two and a half hours, you’ll be treated to amazing scenery from various continents, Africa being a highlight. One minute you wonder how the sandy hills suddenly turn into rolling green pastures. The next minute, you marvel as optical illusions give the appearance of live riders coming from miles away. You won’t believe it; yet it literally changes right before your eyes! And that’s just one of several examples. The staging is absolutely incredible. I won’t totally spoil it for you, but the final scene involves 40,000 gallons of water, which magically appears in under a few minutes.

The show overall boasts most impressive numbers: a 2,000 seat arena, 65 horses, 350 costumes (30-second costume changes), 48 artist performers, plus additional operating staff. Add to that a custom-built stage the size of an NFL football field and 5 massive tents to make a village. It’s obvious that Odysseo is the tour group’s passion--their life, in fact, as they tour much of the year, taking the show to various cities throughout the U.S. and world.

“Odysseo: The Most Amazing Show”: That’s their slogan featured on all the local billboards. I think it’s a huge understatement. But it’s hard to define the experience in a few brief, catchy words. My attempt? “Odysseo: Just Go!”

Things to Know before You Go

Read the website information. Visit cavalia.net for ticket pricing, information, and general rules. I’ll cover other helpful tips I observed at the premiere event on April 20, 2016, in Sandy, Utah.

Get babysitters for younger children. Children under age two are free. However, given the duration of the performance (2 hours, plus a 30-minute intermission) and the fact that all patrons have incurred a considerable expense for their tickets (adult, weekday general admission, starting $49.50), I would encourage parents to leave small children with a babysitter. Let this be a special evening with your partner or with older children. There is much to see, and the show is mesmerizing. I have a three year old; he would have loved it but probably would have gotten the wiggles toward the end. So I made arrangements for him to stay with relatives. Most people at the premiere did not bring really young children. I saw one infant and a few three year olds; most kids there were school age. Every mom knows their kid. If you choose to bring a little one, just be prepared to take them out if needed. 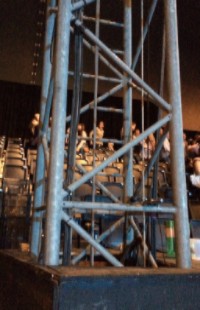 Check for discounts. You can save money on ticket purchases through family discounts. See Cavalia’s site for details. You can also purchase obstructed view seats. For your consideration, shown at left is a picture of those seats.

Note extended showtimes. To accommodate everyone interested in the Salt Lake City event, Cavalia has extended Odysseo’s performances, adding matinees and extra shows thru Monday,
May 16.

Arrive early. Tickets are available for pick-up 90 minutes before the show starts. There’s lots to browse inside the tent. With I-15 traffic often still at a crawl during early evening hours, head out early—even an hour early. You won’t want to miss a single second of this show. I felt really, really bad for the people who arrived late. They had to wait until an usher found an appropriate time in the show for them to enter. It was still disruptive—for them and the rest of us. Mostly, though, they missed out on quality performances

Park in designated areas only. Odysseo event parking isn’t the same as regular mall parking; your vehicle can be towed. There are signs posted indicating this. Instead, follow the arrows to the designated event parking areas. According to Cavalia’s site, you may need to pay to park. So bring cash.

Eat dinner before. No outside food or drink permitted. Cavalia staff check your bags for food items (and anything else you’re not supposed to have) as you enter the tent. A garbage bin is there for disposal. Once inside the tent, you’ll see all the general admission food options. It’s pretty much snacks and drinks, alcoholic and non. I can vouch that Dippin Dots® are $8 for about an 8 oz cup. I insisted my son savor every dot. Also, popcorn is $7 a bag. VIP ticket purchases/packages provide meals. If you are general admission, eat dinner beforehand.

Budget extra if you want souvenirs. You can purchase a variety of quality items at the event. Many of these items are available online through Cavalia’s boutique. You obviously save shipping costs buying in person. Otherwise, at a glance, prices seem comparable. Original fine art, such as the painting shown below, is on display at the event and is also available for purchase. 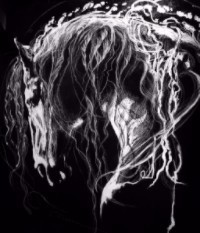 Don’t bring your fancy camera. No photos are allowed inside the arena; except for a few pieces of fine art, there aren’t many photo ops in the shops area where you can take photos. You can also take pictures outside the tent. Once inside the show arena, however, all photography is prohibited so as not to startle the horses and performers. A gentleman two rows in front of us was kindly but firmly asked by a staff usher to put his phone away after he took a picture of the performance.

Hurry to the restrooms. Lots of portable restrooms are provided. Still, during the 30-minute intermission there are lines for the women. Plan accordingly for the wait. The restrooms have flushing toilets and sinks with running water, soap, and paper towels. There are also two family restrooms with Koala Kare stickers on the doors. So diaper changing facilities are available for those who need them. Patrons were being respectful to leave them available for moms with children or those with similar needs.

Prepare to get wet in the final scene if you’re in the front row. All along the first row it becomes quite the splash zone during the final scene. The second row is fine. If you’re on the front row, you might want to bring a rain poncho (no umbrellas as they would obstruct the view for those around you). At the very least, you’ll want a jacket and maybe a hand towel to mop up.

Have you seen the show? What tips would you offer? Tell us at kerry@kidsoutandabout.com.

Kerry Smith is a former editor for the Ensign magazine. She and her husband, Cole, have two sons. Their family blogs at GoBeyondAutism.com.