by Debra Ross Part of KidsOutAndAbout.com's series on family trips in the Adirondacks (Click here to return to Page 1, for more details about the Almanzo Wilder Homestead) 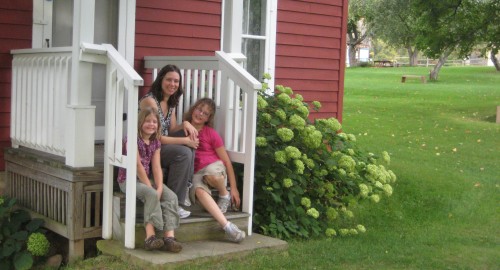 Did my kids appreciate the Almanzo Wilder Homestead experience? Yep, they loved it. They pulled out Farmer Boy for the next several days and read bits of it, all followed by "remember when we were right there in the dining room (or upstairs bedroom, or yard, or river)?" They will remember it forever. The whole "Little House" opus is now more vivid for them.

For me, it was well worth the price of admission just to be there. I could probably have stood in the middle of the kitchen for hours, just gazing around, being there. As a child, I envisioned myself as Almanzo or Alice, hurrying to haul in the potato crop or take my bath Saturday night in front of the stove before I got too cold. Now, I'm Mother Wilder, devising delicious things to eat, weaving that new suit for my son, or sending that same little boy out into sub-zero weather to trudge to school.

So yes, I'm glad I went. I'm glad I brought the family. Those not hailing from way-upstate New York need to consider not just the price of admission, though, but the price of travel. Here are some hints. 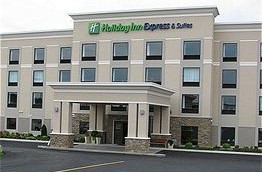 Where to stay in Malone, NY

My family stayed at the brand-new Holiday Inn Expresson the west side of Malone. It was almost unbelievably sparkling clean, new, and comfortable. At $119/night, it was a little pricier than the other hotels we considered, but for us, definitely worth the cost.

The folks who checked us in made sure our stay was everything we'd hoped; they were smart, friendly, and knowledgeable. The pool and whirlpool were nice, too, but almost boringly straightforward rectangles cut into the floor. (We've been in other more creatively-designed pools at other Holiday Inn Expresses.)

The free buffet breakfast in the morning included not only the standard cereals, yogurt, muffins, and toast but also scrambled eggs and yummy bacon. We felt we got our money's worth. Sometimes, when I'm going to be in a city more than once, I vary where I stay to get a sense of different options. In this case, though, if I were to be passing through Malone, I'd make another reservation at the Holiday Inn Express and call it done.

Where to eat in Malone, NY

Whenever possible when I'm visiting a city or town, I ask the locals where the good non-chain food is. The answer I received most frequently and unhesitatingly was a restaurant on the east side of town, on Main Street (Route 11), just out of downtown. So that's where we went. I'm pleased to say we had great luck in Malone!

For lunch, we chose Hosler's Family Restaurant. This regular, unpretentious family restaurant has good food, especially for those on a budget. My daughter's hot dog & chips was $1.99, grilled cheese was $2.99, and my turkey club sandwich was $6.99. The homemade sandwich bread was yummy, the service was prompt and friendly, and the food arrived quickly. We'd go there for lunch again.

Because we wanted a somewhat more upscale dinner, we chose the highly-recommended Donovan's Steak & Ale. And were we glad we did! Donovan's was fantastic. The atmosphere was cozy American arts-and-crafts, with lots of dark wood and nice artwork. The service was terrific, too: It was friendly and prompt, and when a problem in the kitchen delayed our dinner by 20 minutes, the waiter apologized and offered free dessert far before we could get edgy.

As nice as the atmosphere was, though, the reason we'd make a point of going back to Donovan's if we ever return to Malone is the food. (I found a link to their menu here.) They had a nice wine list, and a selection of entrees that ranged from beef and pork to seafood and pasta. There were two entrees to satisfy the vegetarians in your party, but really, there is a reason the place is called "steak and ale."

While the restaurant is not specifically meant for young kids, I saw a toddler in a high chair who did not seem out of place. The kids menu at Donovan's offered fare that was more healthful than what you might typically encounter (though they did offer cheeseburgers as well); my kids had flavorful grilled chicken with potato (one mashed, one baked) and zucchini. (Not that they ate the zucchini, but that's because they're prejudiced against zucchini. I ate theirs. It was great.)

But the steak...oh, the steak. My husband and I both went with the bacon-wrapped filet of beef served with red wine sauce, roasted garlic whipped potatoes, and haystack onions. It was $24.95, more than we might typically spend on an entree (entrees at Donovan's range from about $12 to about $30), but we were glad that we decided to splurge. Wow. A beautiful cut, perfectly done, perfectly sized. I'll remember that steak for a while. For dessert, we all split chocolate mousse cake and chocolate lava cake that were similarly great. Thanks, Donovan's, for a meal that helped make our stay in Malone a lovely memory.

Click here to go to Page 3, for a review of what to do in Malone, NY