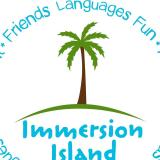 Address:
Immersion Island
Chapel Hill , NC , 27515
Phone: (919) 259-2843
35° 54' 36" N, 79° 3' 36" W
See map: Google Maps
http://immersionisland.org
info@immersionisland.org
Contact name:
Immersion Island
Business/organization type:
Educator
Summer Camp
Subjects / Categories:
Academic
Foreign Language
Ages for which our activities are most appropriate:
All Ages
Adults & kids together
Adults without kids
The director and founder, Jennifer de Lima was a full-time Spanish teacher in Chapel Hill schools for over eleven years. She studied, lived and worked in Mexico for many years, has traveled to many Latin American countries and is married to a Brazilian so she also speaks Portuguese! She enjoys sharing her love and enthusiasm for Spanish and all culture Latino! She saw the need for language immersion camps in the Chapel Hill area, even the whole South East! So, what began as a smattering of enthusiasm and ideas has sprung up as Immersion Island! Read about the The Spanish Camps Staff for the last few summers. They included enthusiastic, native and native-ability Spanish speakers from local colleges and communities who also love to share their enthusiasm of life and language. We look forward to meeting you at Immersion Island! JOIN US NOW!
Click For More Information

You have no education resources added; you can add one here.